Social: Media vs. Networking. What is What? 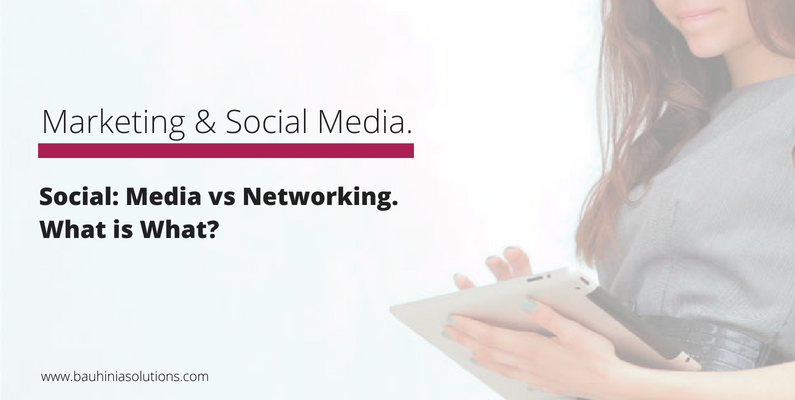 This question reminds me of one that I was asked in a class at uni, studying critical thinking. It goes like this:

Both are online. Both involve friending/connecting, liking, sharing, posting, profiles… the list of similarities can go on and on. But where they differ and where the grey area ends and distinct lines are drawn varies. I have read a great number of articles and this is what I conclude: It is about intent. Your goal. What are you trying to get from the platform and in what capacity are you using it? I truly believe that a single platform can be Social Media for one person or business and Social Networking for another.

What does this mean?

Sure, some platforms are purely Social Media; YouTube and Vimeo for example, where the video qualifies it as media and the functionalities to comment, share, and like, qualify it as social. But it stands alone, no matter who publishes the content, the video is there. Pure. Social. Media.

A chat room, on the other hand, would be strictly social networking (admittedly and generally speaking not quality or safe networking, but pure networking nonetheless) where people speak to one another and engage in conversation.

But hybrid products such as Facebook, Twitter, LinkedIn, Google+ and the like allow you to make them what you will – they bend and mold themselves to your intent.

Example A: Ashton Kutcher, the most famous Twitterer of all time. His Twitter account is Social Media – a way to promote and bolster fame by making him socially accessible. Giving him a public voice. Twitter is his microphone. He is speaking at you, not actually to you. Like a presenter or a politician. He is not engaging with all 16.6 million followers. He does not want to. He couldn’t. Is he connecting with Hollywood directors, relying on his twitter connection to score an audition? Using twitter to collaborate with other artists on new projects? Nope.

Example B: Adam Rifkin, LinkedIn Super Networker, self-described as Undercaffeinated and Overconnected. Don’t know him? Type “Adam” in the search box and he is #3. He has more than 3,000 connections, can connect with more than 15 million people through his personal network, and has 23,973 followers. Adam uses his LinkedIn account to connect with people, present himself as an expert in his field, and communicate with people directly. He has written a great article about how to be a Power Networker, but what I find most poignant is, “A good rule of thumb is to connect with at least 1 and up to 3 people every day. More than 3 means you’re not connecting deeply enough.”

Do you see the difference? It doesn’t mean that you have to make a solid decision and only use networks in a single way. The platforms are hybrids and your strategy can be too. What is important is that you can understand and define the nuances of your social activities so that you can reconcile them against the performance indicators of your strategy/campaign – and get the most out of your efforts!

Example C: A restaurant creates a Facebook page. They utilize the page to promote a seasonal menu, daily specials and events, contests and updates, (Media) etc. But, the manager of the restaurant also takes a moment each day to communicate directly with 2 patrons, from wishing them a happy birthday, responding to a complaint in the public forum, or open conversations about ideas for new menu items (Networking). A hybrid plan.

If you want a hand creating the right strategy for you or your business, call us today and set up a Strategy Session.

Elizabeth’s professional experience is well-rounded, with a deep understanding of digital marketing and advertising, digital publishing, new media, and sales. As a Business Specialist, she focuses on supporting the team and our clients in online advertising and analytics.

Do NOT follow this link or you will be banned from the site!