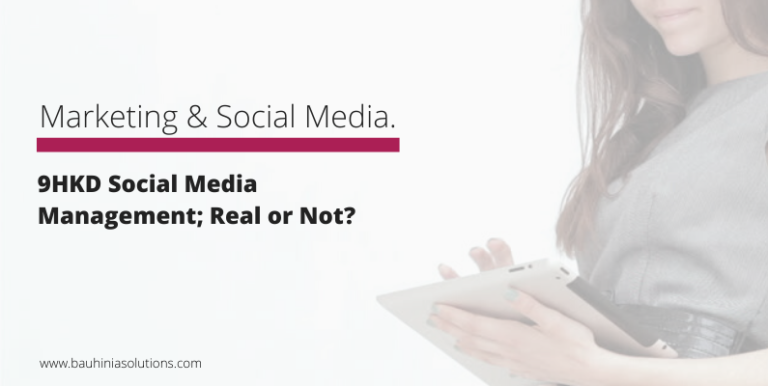 You’ve probably seen the adverts. Companies advertising social media management for unbelievably low prices. “$9HKD a day for growth of around 700 new followers a month!” It sounds too good to be true! Let’s break down the kind of support that you can expect from ‘quick growth’ companies and how it’s different to the way Bauhinia works.

We do think that lots of these social media management companies will deliver what they promise. Some of the techniques commonly used by companies like this might well yield 700 more followers a month, which is surely a good thing? Well, yes and no. If you only want to see your follower count going up, then it’s great. Sadly, that’s about the only benefit you’ll be getting.

Let’s have a think about what $9HKD can buy you. It’s not even enough for a coffee or a chocolate bar. How much work can you really expect someone to do for $9HKD? Realistically, only a few moments of their time and certainly no customised strategy or planning. This is a one size fits all approach. What will happen is this: You tell this company who your competitors are. They follow everyone who’s following your competitor in the hope that they’ll follow back. Some of them will. So, what’s the problem?

These little businesses won’t have enough followers for the amount that follows you back to be meaningful. You need to look at an account with a whole heap of followers. Someone like Starbucks.

They have thousands of followers. If you follow all of them then there’s a good chance that a big chunk of them will follow you back. However, they’re not that likely to be in Hong Kong and to be honest, they might not even be that interested in cafe culture.

So, what’s the point of reaching out and following the thousands of people following Starbucks?

Even if they do follow you, are they likely to ever be your customers? They’re much more likely to follow you for a few days and get bored and unfollow you, or never ever interact.

That brings us to red flag number one. Always ask a social media management company for an example of an account they manage. If there’s a high number of followers but a pretty low number of likes and comments, that means the following they have amassed is not very interested in their content.

Keep an eye out for comments from ‘bots’ – you’ll spot them because they will either be completely generic or won’t be that relevant to the picture.

Watch out for comments from legitimate followers that haven’t been replied to and followed upon. There are plenty of very good social media management companies who don’t reply to comments as part of their package, so in its own not enough to flag suspicion, but it can sometimes be an indication that the account isn’t being managed as closely as you might like.

All this time, whilst your follower count is creeping up, your followING count is flying up! That brings us to red flag number 2.

Accounts following a whole stack of people. You should only be following people that you want to be engaging with on a regular basis. Accounts like local businesses, loyal customers, suppliers, relevant social enterprises, industry influencers. If you see an account following more than about 500 accounts, it’s worth taking a look at who they’re following and seeing if you think they’ve made thoughtful and considered choices.

For those who decide to overlook these red flags, our last word of advice before you decide to go for a low-cost social media manager is to be aware of the risks.

Instagram was designed as a social platform for connecting with like-minded individuals. It was not designed for regularly following and unfollowing accounts on mass, for blindly liking picture after picture or leaving the same generic comment over and over. The developers don’t want you to use their platform in that way and if they see that you are, you’ll get blocked. Firstly, you’ll get some warnings. They’ll disable the like button, the follow button or the comment button for 24 hours. Repeat offenders will be blocked and their account will be deleted.

So, what do Bauhinia do? Aside from creating content, we offer support managing social media engagement, where outreach, nowadays, is so important. Now, this service isn’t the right fit for everyone, some people prefer to take care of it themselves, but for the clients, we do manage engagement for, this is what we do.

We follow people, but we follow them with consideration and we follow them strategically. We might have a look at your competitors’ followers to see if we see anyone we want to connect with. In the example of the cafe, we’re looking for lifestyle bloggers, food bloggers and other independent businesses in the same area. Before we follow anyone, we find, we leave them a few thoughtful comments on pictures we love and start building a relationship. We’d much rather have fewer followers who are all really interested in your business than thousands who scroll past every post!

We reach out to your community. We take time to engage with the people you’re following, as well as people who are using hashtags relevant to your business to nurture relationships and make sure your community knows you value them.

To conclude, if you want to see your follower numbers fly up, then try a low-cost manager. But be aware that you might be missing out on customers, spending resources with very little if any, ROI and putting your account in jeopardy. If you want a slower growth of real people, who stick around because they genuinely love your brand, choose Bauhinia instead.

If you’re overwhelmed, struggling to get things done, or recognise you need some assistance, organise a call with me to discuss your business support needs.

Established in 2007, Bauhinia Solutions is a boutique virtual business support agency with a team of dedicated and experienced business specialists, administrators, and virtual assistants.

About Us  |  Frequently Asked Questions